Is MEAN the New LAMP? 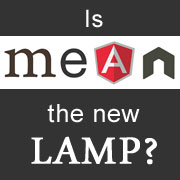 Over the years, the LAMP stack has gained popularity because of its open-source nature and its ease of development, and was considered by many to be the ultimate web development stack. The LAMP Web development platform uses Linux as its operating system, Apache for the Web server, MySQL as the database management system, and PHP as the scripting language. The name LAMP, coined as far back as 1998, stuck, and today, the products making up the LAMP stack are included by default for all major Linux distributions, helping people build powerful web applications.

But these days, MEAN stack is making all the right noises. This begets the question, why MEAN, and why now?

The Rise of the MEAN Stack

Though popular and useful LAMP stack is, modern technology always requires more from the everyday developer. As cloud technology started becoming commonplace, and other revolutionary changes loomed in the horizon, developers started looking at consolidating technologies and leveraging the power of JavaScript-centered technologies. As a result, the MEAN stack was born.

The MEAN stack is a combination of the following -

In the past few years, JavaScript has taken many a great strides to become a mainstream scripting language, allowing web pages to become more dynamic and responsive by running on the client side (browser). Since a developer can easily create applications only by knowing how to code in JS, the MEAN stack allows for easier integration, and faster development times.

From a developer's point of view, they can solely get by with their knowledge of JavaScript, without having to learn different languages such as Python or PHP, a pre-requisite for developing with the LAMP stack. Debugging also becomes much easier, as there is better coherence between objects stored within a database, and those running on the client-side, say, for example, a browser.

Compared to the advancements offered by MEAN, the LAMP stack has some major disadvantages such as -

Advantages of Using the MEAN Stack

More and more developers are being swayed by the advantages offered by the MEAN stack over LAMP stack, as it allows them the flexibility to choose and work with the deployment platform, and leverage the enhanced data retrieval speed. Some of the common advantages of MEAN stack development include -

To MEAN, or Not To MEAN

One size does not fit many. This age-old adage still stands true when it comes to selecting a development stack which could work for you. The MEAN stack definitely offers a lot to a forward-looking web development organization, but still there are critics who think that MongoDB may work out well for small to mid-sized apps, but not for large-scale applications. On the other hand, supporters of the MEAN stack vehemently display how MEAN stack has been deployed by large organizations without any worry.

At the end of the day, the choice of using either LAMP or MEAN should lie with the developer, since organization and project development priorities always differ. Cloud-first web applications will always embrace JavaScript as their one true god, but other, non-cloud applications can always be more stable by developing with LAMP.

With 23 years of extensive experience in software development, we have always embraced state-of-the-art technology when it comes to powering the next generation of web applications. Our open source solutions can suit a variety of business requirements, and our developers offer you a full-stack JavaScript solution for faster, more stable, and high-quality web applications through our MEAN development services as well as our LAMP development services.

Contact us now and partner with knowledgeable MEAN experts to build your next web application!