Key Features of Android 7.0 Nougat and How it Can Enhance Your App 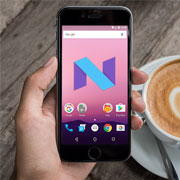 Android 7.0 - Nougat was rolled out by Google in the second half of 2016 and was initially available to only selected devices, but as the days went by this latest version of Android has rolled out to more devices. Android Nougat has been released packed with new features which are sure to catch everybody's attention. Nougat provides much better improvements and security features as compared to the previous Android version of Marshmallow.

As announced by Google, Android 7 Nougat has released packed with almost 250 new features. Though all of them are not equally essential, there are some really good breakthrough features which can possibly change the way we use our smartphones. To make things easier, we have listed some of the best features of Nougat and the improvements in Android 7 in this article.

Out of the sea of new features launched by Google in their latest Android version, Nougat, there are some which really caught our eye. Much more improved and refined as compared to the previous versions of Android, Nougat provides a more sophisticated feel to the entire operating system.

Outsource2india has been providing exceptional mobile application development and a host of other software development services to clients around the world. Our team of software engineers is trained to develop innovative and high-performance apps for our clients within dedicated timelines and with various project constraints in mind. We give life to the creative ideas of our customers and help them to take their business to the next level.

Apart from Android, we also specialize in developing apps for iOS, etc. We follow a standardized mobile app development process keeping in mind the Android 7 features for business apps to create a functional and high-quality app at highly affordable rates. We are known to deliver results within a quick turnaround time through our multiple delivery centers spread across the globe. If you are looking for an accurate, efficient, and cost-effective mobile app development service provider, then look no further. Get in touch with us today!