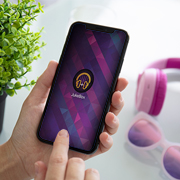 The client wanted us to create a music streaming application that could enable its users to create and share song playlists known as “JukeBaux.” The music app would give its user the option to join the playlists of other users and also transfer music files according to their location.

The client approached us to develop the music streaming app that could load songs from Apple Music, Spotify, etc., and extend the app's capabilities allowing the users to collaborate with each other and share songs.

The most common challenge in front of us was to understand the app's core functionality in terms of coding so it could be adopted and installed by the largest number of users. There was no question of compromising on the designing, thus, the user interface must appeal to all segments of the user.

However, the major challenge that our coders faced was to concur on a development process that would allow the user to transfer the music files over Wifi. We had to develop a responsive cross-platform app that would work equally well on all the major mobile OS, including iOS & Android.

The other challenges, which we eventually got a solution to, were to create a permission-based functionality to allow collaborations among users on the playlist and working out a common ISRC implementation process.

We created the music app that allowed our client's users to collaborate with each other for sharing songs within a wide range of 50 meters. We developed the app that would function in two different modes, one was online and other offline. The online mode enabled the users to select the songs from apps like Spotify, etc. The offline mode allowed the users to collaborate with JukeBaux creator over the Wi-Fi.

We created a user-friendly and powerful user interface allowing the users to quickly adapt to the music app. We took advantage of our extensive expertise on Java and Swift to create a rock-solid backend that allowed the users to use the app flawlessly. To effectively implement the real-time playlist, we utilized the SignalR framework that also enabled the users to update the app and vote their choices. And to optimize the music app, we used SQL database and .NET.

Now, after the successful completion of the project, the users could unite with each other under the same platform to listen and share the songs in real time in offline or online mode. Moreover, with the unique feature of upvoting and downvoting, the users can now play their songs based on its popularity.

We also provide 24*7 support & maintenance services and have a transparent mobile app development process. If you want fast, unfailing, high-performing, and secure music app development services, then look no further. Get in touch with us today!