Why is Bus Rollover Analysis Important for Vehicle Manufacturing Companies? 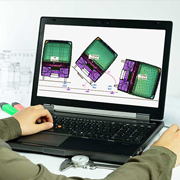 Millions of people every day take a bus to get where they need to go, which necessitates the need for an increased scrutiny of their safety.

Due to a high number of rollover accidents with a high death toll in each such accident, many countries, especially in Asia, have started evaluating construction processes and engineering of these buses to learn how such accidents can be reduced. To ensure passenger safety, bus coach manufacturing companies are increasingly being required to meet strict bus rollover standards through careful testing and analysis.

A rollover consists of any vehicle rotation of 90 degrees or more on a true longitudinal or lateral axis. If a vehicle leaves two wheels and rolls on to one side, it is considered a rollover. This can affect any vehicle, but the risk is much greater for vehicles with a high vertical profile, such as heavy trucks, SUVs, and buses. Abrupt steering, sudden shifts in direction, or sharp turns at high speeds can cause the momentum of the Center of Gravity of a vehicle to pull it to the side and turn - for a bus with so much mass, especially when full of people, this becomes an even greater risk.

For this reason, testing is incredibly important. Not only does it allow manufacturers and safety commissions to understand the conditions that can lead to a rollover, but the safety mechanisms that will help prevent one from happening. Testing is done for all of the following conditions, each of which has been shown to lead to rollover:

Other factors taken into consideration in these tests include:

The actual road can be flat, cross-slope or unpaved and the risk of rollover is roughly the same if other risk factors above are present. Speed in particular has a large impact on the risk of a rollover.

Because of all of these factors and because there is a human error factor to consider with a driver, rollover analysis is a complex process, which is why the finite element method is used to ensure precision in every step of the process.

In Finite Element Analysis, a surface, such as the vehicle's body, is divided into a large but finite number of elements. These elements can then be measured in response to certain stimulus over time. A model of the vehicle being tested is created using FEA software. Such a model will have upwards of 500,000 to 1 million elements, each measured in the simulation at small increments to see how the vehicle would respond under certain conditions.

Crash testing is performed to evaluate a vehicle's performance in a crash. The purpose of these tests is to measure crashworthiness - the ability of the vehicle to protect its passengers in the event of a crash. While in the past these tests were performed with physical buses under controlled circumstances, today the FEA model above is used to simulate crashes in several environments. Typically, this involves measuring the impact of a 3D model of the bus against a stationary barrier at a normal running speed. From these tests, the deformity of the bus and the barrier are measured to determine the impact of the crash.

To perform these tests, modeling is performed using CAD software. Combined with meshing created software such as Ansys, layers can be added with upwards of 15,000 elements for measurement. The crash analysis is performed in software such as Ansys following crash standards, using standard materials - typically steel for the body, floor side-sheet, chassis and wheel-hub.

Specific conditions are measured as well including frontal impact, side impact, rollover, and torsional force. The results of the test are coded so it quickly be seen the normal stress placed on a bus in various circumstances, the strain energy on that bus, and the results of total deformation - both in what it does to the bus, and the specific circumstances that cause it. Additional analysis with Anthropomorphic Test Devices (ATDs) in the FE model of the bus can be performed to measure the impact of these crashes on passengers.

Advantages of a Bus Rollover Analysis

There are several reasons why bus rollover analysis has significant value for manufacturers, local governments, and safety oversight for mass transportation. Primarily, it helps to determine without running situational tests with a physical bus whether the vehicle would be able to support itself in a dynamic impact.

By knowing the ability of a bus to withstand such an impact, and the likelihood that such an impact would occur, the manufacturer can determine if any improvements are required to existing coach designs. These might include new safety measures, structural changes, or retrofits.

The ultimate goal of this form of testing is to reduce the number of accidents that occur each year, save lives, and improve overall passenger safety. Manufacturers will be able to incorporate safety measures they know will work based on these tests, improving performance and safety while maintaining operational costs. This type of test helps get things done for less money and in less time - both vital for manufacturers of bus coaches.

Outsource2india offers comprehensive bus rollover analysis for bus coach manufacturers and local governments who want to ensure every passenger remains as safe as possible. Using the Finite Element Method to conduct rollover tests and simulations, O2I has been helping to ensure bus safety for more than 23 years.

The Outsource2india team of engineers creates a model that accurately shows whether a bus is able to support itself in a dynamic impact. The Finite Element Analysis technology used to do so is able to dynamically analyze the components, dimensions, angles, and velocity of a bus in different situations, taking into consideration passenger and luggage load, speed on the road, and outside factors like weather and traffic. Following ISO quality standards, we ensure every such analysis meets the client's benchmarks in both detail and quality and turnaround time. Our goal is to return every such project in 24-48 hours, though actual turnaround time will depend on the project complexity.

Our pricing structure can be adapted to the needs of your project and budget - learn more about our pricing here or contact us now to outsource your bus rollover analysis requirement.

Join the growth phase at Flatworld Solutions as a Partner

Reach out to us for a quick direct response from decision makers at the Flatworld Solutions global team.