Internet of Things is Big, and Market Researchers Can No Longer Ignore It 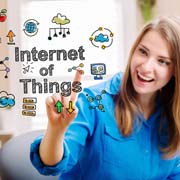 The Internet of Things has been a buzzword for over few years now, but it is only lately that we've begun to see its true potential as a game changing technology. In the simplest of terms, IoT is a concept of everyday objects - from streetlights, to industrial machinery, and even wearable devices - which are interconnected using built-in sensors and share relevant data wirelessly amongst each other. With thousands of applications currently in use and new ones being discovered daily, it is not too far to assume that soon major part of our lives will be impacted with IoT devices in some way or the other.

The statistics also point towards a future where more than 50 billion devices would feature internet of things technology in some form or another by 2020, which will grow up to 1 Trillion devices by 2025. This 75% growth is being attributed to non-hub devices such as sensor nodes and accessories.

Internet of Things in Market Research - 5 Important Things to Know

For market researchers, its second nature to keep looking ahead as well as pay enough attention to the present and the past. For them, the next evolution of Internet of things is the "Internet of everything" where the focus not only relies on the devices between which data is transferred, but also on how the data is transferred.

The emergence of big data analytics is now helping to take the potential value of everyday interconnected devices and services to a whole new level. Researchers are also gaining the ability to granularly analyze data sets and extract real-world insights and informational value from such mundane, day-to-day things as well. Let us have a look at how market researchers can leverage IoT for their own benefits -

2016 was a landmark year which marked IoT's significance on the world map and allowed the often misunderstood technology to gain legitimacy. Companies and organizations across industries now have IoT squarely on their radar, and the future indicates a bright opportunity for researchers who are willing to understand this technology and how it will affect millions of lives all over the world. Future trends for IoT include -

At O2I, our market research offerings help to provide you with additional visibility into a sector of your own choice. We are one of the world's leading service providers for real-time market intelligence for all things related to the internet of things and machine-to-machine (M2M) communication.

We combine our 24 years of experience with our IoT expertise to provide IoT-integrated market research services for both medium and large-scale businesses. Contact us now to know how we can help your business with advanced and streamlined market research.