Ways in Which Trump's NAFTA Renegotiation Will Change Trade 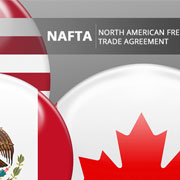 North American Free Trade Agreement or better known as NAFTA has been prima focus in the talks of all the American presidential candidates this year. Elected President of the United States of America Mr. Donald Trump has maintained throughout his campaign that he will be renegotiating the NAFTA, by either changing the policies or completely withdrawing from the deal. NAFTA is seen as a deal which is taking away jobs from the Americans. This has been the focus of Trump's presidential campaign throughout.

After being elected as the President, Donald Trump vowed to start renegotiating the North American Free Trade Deal at the swearing-in ceremony at the White House. Currently, around $1.4 billion worth of goods cross the borders daily. Apart from easier trade between the countries, NAFTA also makes it simpler for companies to move their operations from one country to another.

North American Free Trade Agreement or the NAFTA was a trade deal signed between three countries, the US, Canada, and Mexico back in 1994. The deal was signed by President Bill Clinton and was aimed at simplifying the trade between the three countries. The deal framework eliminates the various tariffs among the three countries and allows the unrestricted supply of goods across the borders. The US-Mexico border currently witnesses an annual crossing of over $500 billion worth of goods.

The deal mainly aims at liberalization of trade in agriculture, automobile manufacturing, textiles, etc. It also sought to protect intellectual property, set up dispute resolution mechanisms, and also implements environmental and labor safeguards. It was also known to have deprived the United States of many jobs. Eliminating the NAFTA was a frequent promise made by President Trump during his presidential campaign.

What is the Economic Impact of North American Free Trade Agreement?

Since the inception of the North American Free Trade Agreement in the year 1994, the trade between the U.S. and its North American neighbors has tripled. Mexico and Canada have been the largest destinations for U.S. exports and accounts for more than one-third of the worldwide exports. It is known that the deal has impacted the nation's GDP positively.

Supporters of North American trade agreement argue that the benefits of the deal are widely distributed across the society. They estimate that around 14 million jobs are dependent on the trade with Mexico and Canada and nearly two hundred thousand jobs created annually by the pact pay almost 20% more than average jobs that were lost.

The critics of this deal, on the other hand, argue that the deal has led to stagnation of wages in the U.S. and massive job losses. Many companies moved production to Mexico owing to the low-wage competition and thus resulting in the widening of trade deficit.

For President Trump, NAFTA has been one of the key reasons to destroy jobs in the United States. He has made it clear from a long time that he intends to kill or tweak this two-decade long pact with the North American neighbors and replace the pact with something else. Canada has agreed to work on the renegotiation of the NAFTA but Mexico has clearly expressed displeasure and said that they are not open to this proposal.

Partner with Us for the Most Efficient Logistics Support Services

Outsource2india has been providing top-quality logistics support services to clients all over the world for over 23 years now. By outsourcing to us you can improve the productivity of your company, irrespective of whether you are a transportation company, global logistics company, 3PL logistics provider, or a freight forwarder. Our team at Outsource2inida ensures that all the processes operate smoothly. We even take care of all the documentation and payment processing requirements at really cost-effective rates.

We ensure that all the information you share with us is completely safe with us. We follow strict confidentiality agreements and data security policies. Our team is trained to handle any kind of logistics support services and is always updated with latest trade agreement developments including NAFTA and TPPA. If you are looking for a reliable, safe, and cost-effective logistics support service provider, then look no further.

Get in touch with us today!